May 6, 2021
-Advertisement-
Microsoft is one of the best company our there producing smartphones for customer, as already known their devices uses window software and we have lits of them in market. Today, lets discuss about comparison between Surface pro 2 and surface pro 3. The Surface Pro 3 was launched towards the end of  June, 2014 and Surface Pro 2 made its entry the previous year in October 2013.
There is a reasonable price difference in the two tablets and the Surface Pro 3 turns out to be the more affordable tablet. Both the tablets support a wide range of desktop apps. If you are looking forward to buy a Surface tablet to use as your primary computer, then the Surface Pro 3 could be a better choice. On the other hand, the Surface Pro 2 proves to be handy if you are going to use it along with your laptop or desktop computer. However, each tablet is a good choice for business and personal use.
Check out some features of the two tablets below to guide you in making the right decision according to your requirements. 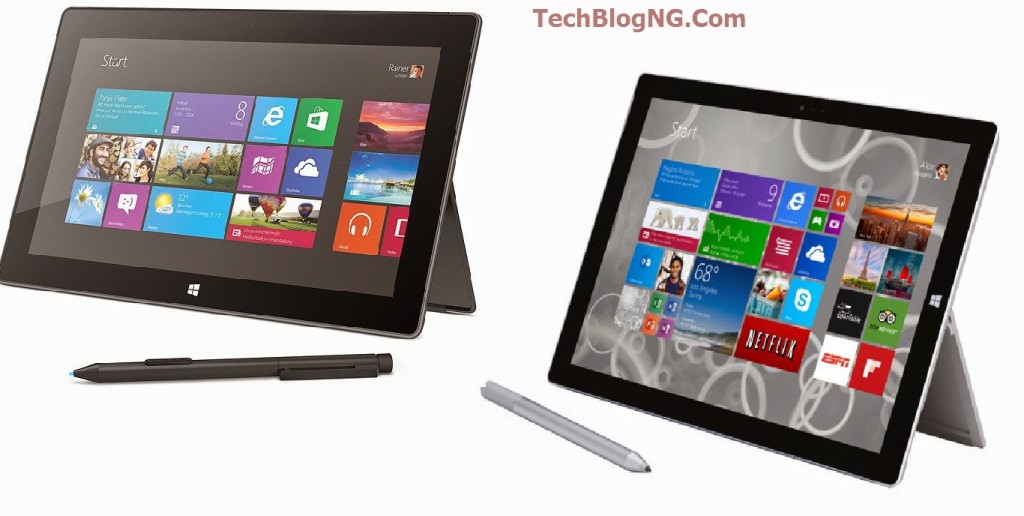 Dimensions and Weight
The two tablets are quite rugged with a metal body and are ideal for day to day use. They are
also capable of surviving an accidental fall or two without resulting in damage. However, the
pen-like stylus is quite different. While the Surface Pro 2 uses a Wacom stylus, the Surface
Pro 3 features an N-trig digitizer stylus. While the Pro 3 tablet is longer and wider than its Pro
2 counterpart, the difference in their thickness is hardly noticeable. But as far as their weight
is concerned, the Surface Pro 3 is definitely a much lighter tablet.
Verdict: The Surface Pro 3 is definitely less heavy, resulting in being easier to hold in your hand. Yet, it may be difficult to keep it in places where there is less space. Moreover, its stylus needs a battery for operation while the stylus of the Surface Pro 2 can be used without one. The sensitivity level of the Surface Pro 3 is also much less than the previous version tablet.
While the Pro 3 stylus is better suited for scribbling or note taking and using on the corners of the tablet, the Pro 2 stylus takes the upper hand when it comes to drawing or sketching activities.
Screen Display
The screen is definitely much bigger in the Surface Pro 3 that sports a 12-inch screen in contrast to the 10.6-inch screen of the Surface Pro 2. The display technology and touch element are also slightly different. While the Surface Pro 2 houses a five-point multi-touch element with ClearType Full HD display technology, the Surface Pro 3 comprises a ClearType Full HD Plus multi-touch screen. The Pro 2 encompasses a 1920 x 1080 pixel resolution with 208ppi pixel density whereas the Pro 3 comes with a pixel resolution of 2160 x 1440 and its pixel density is 216ppi.
With a 3:2 aspect ratio, the Surface Pro 3 is capable of displaying more content than the Surface Pro 2 which features the standard 16:9 aspect ratio. This makes it more suitable for activities like web browsing and working on Microsoft Office documents. Color and brightness contrast levels are also better defined in the Surface Pro 3.

Processor and Operating System
The Surface Pro 2 is loaded with a Core i5 processor whereas the Surface Pro 3 has three options of Core i3, Core i5 and Core i7. While the former tablet comes with Windows RT 8.1 operating system, the latter functions on Windows 8.1
Camera
In the camera department, the Surface Pro 2 depicts a 5MP and a 3.5MP primary rear facing and secondary front facing snappers respectively. In comparison, each of these two snappers in the Surface Pro 3 is a 5MP camera.
The Pro 2 camera records 720p HD videos as against the Pro 3 that is capable of shooting 1080p HD videos. Neither camera really outshines the other with respect to the other when taking
photographs and cannot be compared with the photo quality of shots captured using
smartphones. Yet, the Surface Pro 3 shots tend to be marginally sharper with better color
balance and contrast levels. However, the big leap comes when you check out a good camera
for video chats and selfies. The Surface Pro 3 definitely takes the cake here.

Storage Regarding the memory availability, the Pro 2 is available as a device with 32GB or 64GB storage
and 2GB RAM. The Pro 3, however, has more options for you. You can choose a tablet with
4GB RAM and 64/128GB storage option or an 8GB tablet with 256/512GB ROM for storage.

-Advertisement-
Previous articleTips to Make Android Opera Browser Super Fast in Browsing
Next articleWhatsapp Voice Call is Now On, Here is How to Activate it

This Game Can’t Get to the App Store Soon Enough

Top Countries for Vacation in December