Japan is an island country of East Asia in the northwest Pacific Ocean. It borders the Sea of Japan to the west and extends from the Sea of Okhotsk in the north to the East China Sea and Taiwan in the south. In fact, Japan comprises an archipelago of 6,852 islands covering 377,975 square kilometers. 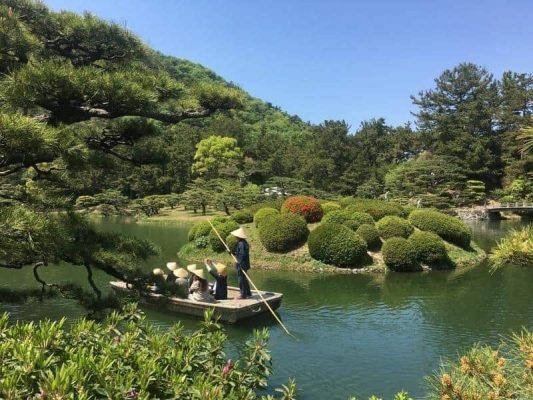 With the huge list of 6,852 islands, let’s check out the 5 Largest Islands in Japan:

Honshu also features several rivers and is also home to Shinano River, which stands as the longest river in Japan. Standing at the pinnacle of the Largest Islands in Japan, the Honshu is also 2nd most populous island in the world after the Indonesian island of Java.

Hokkaido stands at the 2nd position among the Largest Islands in Japan. With the total area of 83,454 km², the Hokkaido is the northernmost and largest prefecture in Japan. In housing a large number of volcanoes and mountains, the Hokkaido also features lots of national and semi-national parks. The cold winters and cool summers are the distinct feature of Hokkaido, one of the largest Islands in Japan. The island is hugely famous for the role in the agriculture sector and stands among the top in the production of corn, beef, and wheat.

Kyushu is the 3rd largest Island in Japan with a total area of 36,753 km². Kyushu is just another island widely famous for the large number of volcanoes and mountains. In fact, the island of Kyushu features the most active volcano on the island of Japan, which is Mt. Aso. The island of Kyushu also features several museums, mega-malls and an 8th-century Shinto shrine, Kushida-jinja.

Shikoku is the 2nd smallest island among the 5 Largest Islands in Japan, which has a total area of 18,800 km². The island of Shikoku is the 50th largest island in the world. Located to the east of Kyushu and southeast of Honshu, Shikoku features lots of Buddhist temples. Just like other Islands in Japan, Shikoku also features lots of mountains but with a lesser altitude. One important point of Shikoku is that this island doesn’t have any volcanoes.

Okinawa is the smallest island among the 5 Largest Islands in Japan. Okinawa is located between the North Pacific Ocean and East China Sea. Okinawa has a total area of 1,199 km². Okinawa features one of the oldest populations in the world and actually has the youngest and fastest-growing population among the prefectures of the island of Japan. In fact, a record states that there are 34 centenarians per 100,000 people on the island of Okinawa.

Japan is a lovely island country which is called as the land of islands. Japan has a rich cultural history and stands as the 11th most populous and among the most densely populated country in the world.

The Power of MiniTool Data Recovery Software for PC

Barbados is an island in the eastern Caribbean, and...
Attractions

Florida is made up of beautiful and cozy beaches,...
© 2022 All Right Reserved
error: Content is protected !!