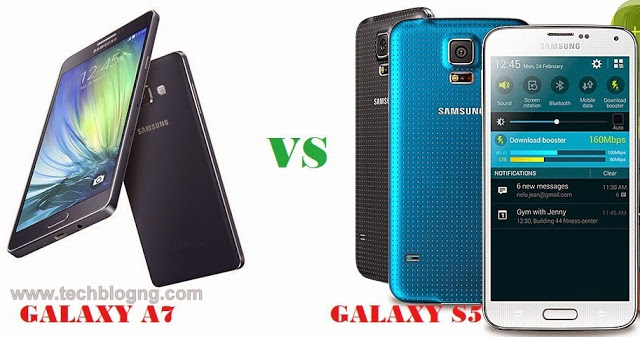 This metal-clad smartphone is expected to reach all the stores somewhere in Q1, being announced in January, and we have great expectations from this model. The Galaxy S5 flagship was released in April, last year and as much as we’d love to praise its hardware features, we can’t lie and say its appearance can leave anyone speechless.

Designs, displays and dimensions
The high-end Galaxy S5 is not of the most beautiful smartphones out there and we would have wanted to see a glossy plastic casing instead that perforated back with matte effect. It’s just cheap and ruins the reputation of the line. We’re absolutely sure that its successor will recover the lost ground, but until then, the fans who won’t be able to afford the new model, will buy the Galaxy S5, which weights 145grams and measures 142×72.5×8.1 mm.
The device has a 5.1inches display with a high resolution of 1080×1920 pixels that is found on other flagship smartphones, as well, and supports 432ppi. Samsung introduced the fingerprint sensor on the Galaxy S5, but it’s missing from the Galaxy A7 . In addition, the Galaxy S5 is water and dust resistant, while with the Galaxy A7 you’ll have to be careful not to drop it into water. Now, let’s talk about Galaxy A7’s design and display.
The device is a phablet that features a 5.5inches display like the iPhone 6 Plus and has the same resolution and pixel density as the Apple device, 1080×1920 pixels at 401ppi. It supports dual-SIM (optional) and it’s very thin at 6.3mm, measuring 151mm in height and 76.2mm in width. Also, it’s 4grams lighter than the Galaxy S5 and features a metallic unibody design, which is a breakaway from the usual and boring plastic bodies. But unlike the iPhone 6 Plus, it has a microSD card slot.
The phablet will be released in shades of Pearl White, Champagne Gold and Midnight Black.

Hardware
While the Galaxy S5 came with a 32bit Qualcomm MSM8974AC Snapdragon 801 chipset supporting a powerful Krait 400 processor with four cores, clocked at 2.5 GHz, and uses Adreno 330 graphics with 2GB of RAM. The Galaxy A7 is the first Samsung smartphone that comes with a 64bit chipset, being available in two variants of processors – one a Qualcomm MSM8939

Snapdragon 615 (for the LTE/3G Dual-SIM model) supporting two quad core processors clocked at 1.5GHz and 1GHz, being coupled with Adreno 405 graphics, and the second variant uses an Exynos 5 Octa 5430 chipset (LTE model) also with two quad core processors, but they’re clocked at 1.8GHz and 1.3GHz, and they’re coupled with Mali-T628 MP6 graphics.
The handset was equipped with 2GB of RAM and will run on Android Lollipop, enjoying all of its features and applications that were created specially for 64bit processors. The Galaxy S5 runs, for now, on Android v4.4.2 KitKat. Regarding the internal memories, the Galaxy S5 is available in two variants of 16 and 32GB, expandable up to 128GB, while the Galaxy A7 came with one storage option of 16GB, expandable up to 64GB.

Cameras and batteries
Both the rear camera and battery are weaker than those of Galaxy S5’s, meaning that the shooter from the back has a resolution of 13MP and regular features and the battery has a capacity of 2600mAh, being non-removable. The Galaxy S5 comes with a 16MP primary camera with phase detection autofocus, 1/2.6” sensor size, 1.12 µm pixel size, HDR and many other features.
In terms of secondary cameras, the Galaxy A7 beats the phablet with its 5MP shooter, compared to 2MP. And the battery is user-replaceable and its capacity of 2800mAh supports 21hours of talking time.

Prices
The unlocked version of the 16GB Galaxy S5 costs 530 dollars on Amazon, having the same price as the Galaxy A7, which was firstly launched in Russia.