As at December 2014, Samsung rolled out a new type of mobile DRAM that smartphones to carry up to 4GB of volatile memory and now Samsung says it’s getting ready to cram up to 6GB of RAM into our handsets. 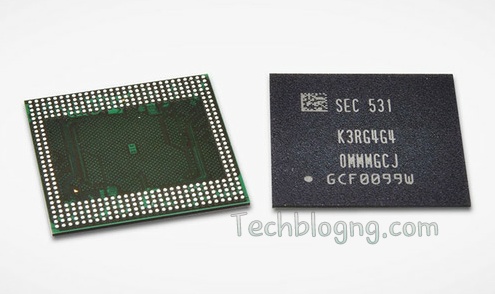 The increased RAM comes courtesy of Samsung’s mass production of 12 gigabit LPDDR4 (low power, double data rate 4) mobile DRAM. The new memory is being produced using Samsung’s 20-nanometer (nm) process.
Samsung says the new DRAM is 30 percent faster than the previous 20nm-based 8Gb LPDDR4 and twice as fast as DDR4 DRAM for PCs. The new mobile memory means a single package can use two chips to carry 3GB of RAM or four chips for 6GB. This will not only result in premium smartphones packing more RAM, but smaller phones won’t have to skimp on memory due to size constraints.
It’s not clear when we’ll start to see smartphones packing the new RAM. Right now, most phones use 3GB, and Apple packs just 1GB RAM into the iPhone 6 Plus. Whether we need more memory in our phones right now is unclear, but no doubt developers will make use of the added RAM over time.
Samsung sees a future for its LPDDR4 DRAM beyond the smartphone and tablet markets where it’s currently called for. In the coming years, the company hopes to see Ultrabooks, digital appliances, and even auto tech packing the new DRAM. For now, however, it’s all about increasing the memory capability of mobile devices to support multitasking and more powerful apps.

How to Stop Unwanted Notifications in Chrome Browser

These days, it's nearly impossible to live without a...
Tech

On the product side of the Mi series, the...
Android

Applock not Working is common nowadays so if you...
© 2022 All Right Reserved
error: Content is protected !!