Xiaomi Redmi Note 2 is a flagship Android Lollipop smartphone. The device features the use of two micro sims along with the 4G Network for faster browsing experience. Checking on the design, Redmi Note 2 features a unibody design and the rear back cover can be removed which allow access to battery, micro sdcard and the dual micro sin acrd slots. The volume buttons are located on top of the power button at the right-hand side of the device. The headphone jack and microUSB port are placed up top and at the bottom respectively. There’s also the addition of an IR blaster and the capacitive navigation keys (menu, home and back) below the display are illuminated and of a red colour. The device is thinner and lighter allowing for a far improved handling experience. 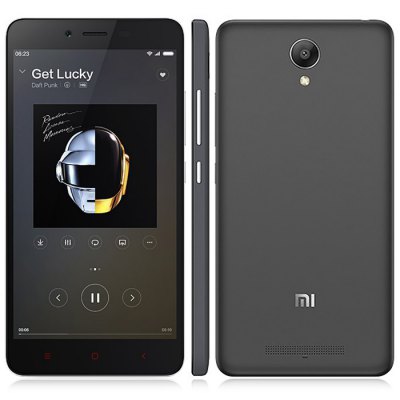 Xioami Redmi Note 2 features a 5.5 inch 1080P IPS LCD display with a resolution from 720p to full HD, resulting in a higher pixel density of 401 ppi. The display is sharp and offers excellent viewing angle.

Redmi Note 2 is equipped with octa core MTK MT6795 annual flagship Helio X10 processor using the new generation of 64bit architecture. The devices runs on the latest Android 5.1 Lollipop OS along with a 2GB of RAM and MIUI 7. Redmi Note 2 adpots POWER VR series GPU released by imagination company which gives and boost the device 3.5 times better performance than the Redmi Note. You would enjoy easy navigation, multi-tasking and faster operations on the device. When talking about the storage, Redmi Note 2 is of two types one with a 16GB internal storage and the other with 32GB internal storage. Also you have an external sdcard slot with a capacity of upto 32GB. All the storage spaces can be used to save files, apps, photos, videos and other documents of any type.

The Xiaomi Redmi Note 2 comes with a 13 MP Rear Camera with a LED Flash and phase detection auto focus for sharp and clear images. There is also a front-facing camera of 5MP. While the auto-focus is very fast, the actual performance of the camera is above average. Both cameras are also good in video recording.
The device is equipped with a long-lasting removable 3,060 mAh battery. With WiFi on for most of the day and the screen brightness set to auto, the device can manage over 5 hours of screen on at most and lasted for over 14 hours for overall usage.

Xiaomi Redmi Note 2 is an excellent device when putting nice design, powerful processing package, great software experience and price into consideration. The 16GB and 32GB versions of the device is only available for pre-sell on most shopping mall till September 17, 2015  for a price tag of $168.85 and $205.85 respectively. You can buy the smartphone for a more cheaper price on Everbuying, the 16GB version can be bought for $159.99 when you use coupon code RedMi16GB and the 32GB version for $179.99 by using coupon code RedMi32GB  while checking out.
PRE-ORDER XIAOMI REDMI NOTE 2 16GB NOW
PRE-ORDER XIAOMI REDMI NOTE 2 32GB NOW

How can I Get Crypto Loans to Trade?

Motorola Moto C Plus – Specifications, Features & Where to Buy