TCL 3N M2U is an Android phablet with a brighter HD display screen of 5.5 inch and resolution of 1280×720 pixels. It features a normal design expected from a mid range smartphone which makes it smooth and easy to handle. The phone adopts the newly developed MTK6752 64bit Octa Core processor clocked at speed of 1.5GHz. It also has Mali T760 Graphic processing unit which power up 3D games of glories scenes and vivid visual effects. You also have 2GB of RAM to work along with the processor for more faster operations. TCL 3N M2U has an internal storage space of 16GB and external sd card slot capacity of upto 32GB for saving files, medias and other documents of any type.
TCL 3N M2U is also built for taking clear and sharp photos featuring a 13 Mega Pixel Back Camera with led flash. You also have a front facing 8.0 Mega Pixel Camera for taking selfies.
TCL 3N M2U is also gifted with a non removable 3500 mAh lithium polymer battery which added to the performance of the device making it last for long periods. 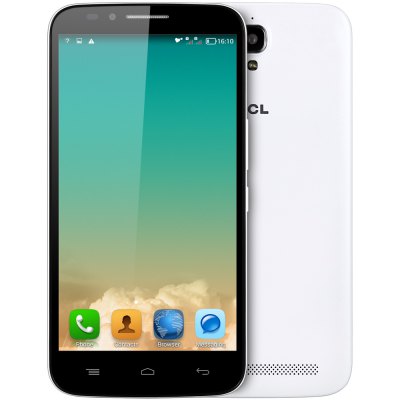