Samsung Galaxy Note Edge is very much alike to what you would expect from Samsung’s high-end phablet line, and
at the same time was completely different. 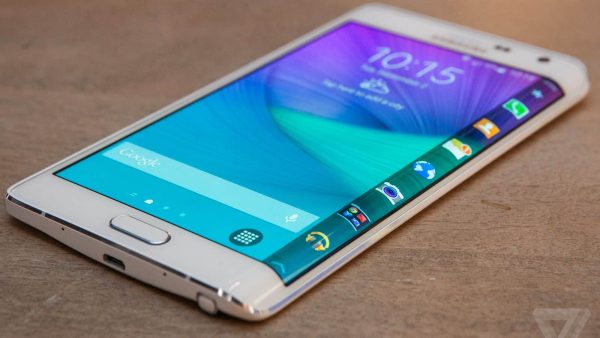 Indeed, the Note Edge is a copy of the Note 4, and features the same rectangular body with rounded corners, along with a very similar metal frame that hugs the body from all sides. It has got the same faux-leather texture at the back, there are no stitches here compared to Note 3, and the pattern is different. We found that we like this one better. It gets interesting on the right side of the Edge, which is where the short, but the wide display is located. It honestly looks cool, but mostly in a geeky kind of way.

Display
Firstly, let’s forget the side screen for a moment, and focus on the main screen. We have got a 5.6-inch (yes, it’s smaller than the Note 4’s) AMOLED display with a Quad HD (1440 x 2560) resolution, good for the whopping 525 pixels per inch. We’ll obviously have to wait until we can tell if Samsung did a good job calibrating the panel.
Turning to the screen on the edge of the phone, all we know for sure right now is that it makes do with 160
pixels. As for its size, it should be 1 inch. The really cool thing about the tiny screen on the edge is that it seamlessly continues the phone’s wallpaper, and is obviously capable of displaying various types of information at all times.
For example, you can customize it so that it holds specific app shortcuts, but space will also be automatically filled with settings when you fire up the camera, or media controls when you have the music player working. It’ll also show you your missed notifications. 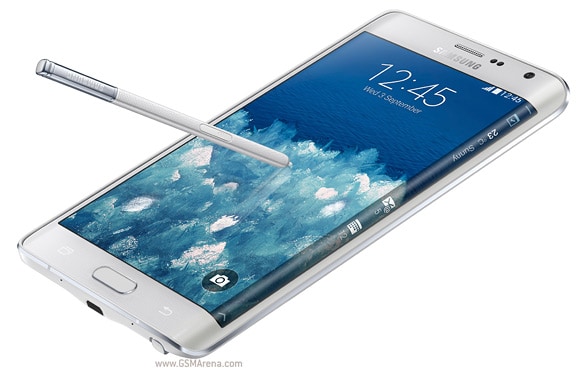 Interface
There’s nothing fancy going on in terms of the software powering the Galaxy Note Edge, aside, of course, from the fact that Samsung has obviously reworked some of the main apps so they can make use of the screen on the edge, and will allow third-party developers access to the same.
The Edge is powered by Android 4.4 KitKat with Samsung’s proprietary TouchWiz skin on top of it. As many of you will know, the layout is extremely feature-rich, though quite a few of the extras are far from very useful. One example is the hardware heart rate monitor that is embedded next to the LED flash at the rear, though the list goes on.
That said, perks like Smart Stay (screen stays on for as long as you’re looking at it) and the many features
that the S-Pen stylus unlocks are quite handy, so the software definitely has its strength.
Processor and Memory
Along with the Note 4, the Note Edge is on the path to becoming one of the very first devices with Qualcomm’s latest and greatest Snapdragon 805 chipset. The new silicon is specifically crafted for use with ultra-high-definition screens such as the one the Edge has and handles UHD video content well.
If you dissect the Snapdragon 805, you’ll find four Krait 450 cores inside, running at 2.7 GHz, along with an Adreno 420 GPU. That last one should ensure the smooth operation of the device, despite the many, many pixels it needs to push. As for memory, Samsung has equipped the Note Edge with the generous 3GB of LPDDR3 RAM.
Camera Features
Samsung has outfitted the Note Edge with the same 16-megapixel camera found on the Note 4, complete with what it calls Smart OIS. The moniker essentially indicates that the device combines the efforts of a physical Optical Image Stabilization gizmo and a software digital stabilization to produce shake-free video without any degradation in the speed of delivery. OIS is also helpful in low-light environments, where even small tremors can introduce blur due to the longer exposure times needed to capture enough light.
Looking at the front, there is a 3.7-megapixel camera that should prove more than good enough for all your self needs. In fact, Samsung has added a special feature for you to shoot selfies.
Other Details of the Galaxy Edge are below:
The Galaxy Edge which is 5.6 inches in the display would be using a Micro Sim and 1600 x 2560 pixels in size.
It has been produced with 3G Network (HSDPA 850/900/1900/2100) and 4G Network (LTE 800/850/900/1800/2100/2600).
It has a Memory Card slot (microSD), up to 128 GB, an Internal Memory of 32/64 GB, and lastly, it is a smartphone with 3 GB RAM as already said above. Galaxy Edge comes with Android OS, v4.4.4 (KitKat), Chipset – Qualcomm Snapdragon 805, GPU – Adreno 420, CPU – Quad-core 2.7 GHz Krait 450 and it’s also java enabled.
It also provide with WLAN (Wi-Fi 802.11 a/b/g/n/ac, dual-band, Wi-Fi
Direct, DLNA, Wi-Fi hotspot), Micro USB v4.0, and Bluetooth v4.1.
Lastly, the galaxy edge has got Li-Ion 3000 mAh battery and other useful applications pre-installed.