Some Interesting Facts About Microsoft

Microsoft Corporation otherwise abbreviated as MS is an American Multinational technology company, which has its main headquarters in Washington. The company is responsible for the development, manufacture, support and licensing of various products. These products include computer software, computer electronics, and services among many others. The company is best known for its exceptional line of Microsoft Windows operating systems and products. 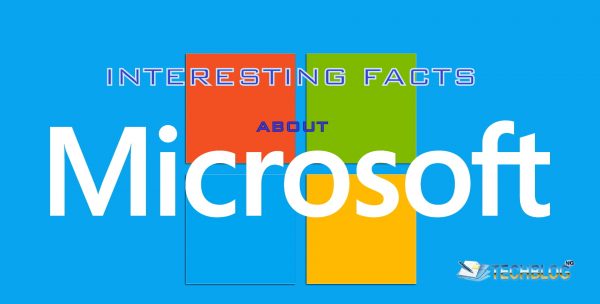 More so, the company is also well known for its Microsoft Office Suite, the Internet Explorers, and various other products. One of its main flagship products comprises of the Xbox Video game consoles and the range of Microsoft Surface products. Since 2016, the company has been classified as one of the largest software developers when it comes to turnover levels. The following are some interesting facts about Microsoft. It is a leading tech and electronic service company that has been in operation for well over two decades.
Since 2015, Microsoft has been regarded as the most dominant company when it comes to IBM compatible operations systems and their office suite of products. However, they have lost a significant portion of their overall OS market to the other companies such as Android. More so, Microsoft also produces various types of enterprise programs and consumer products for customers. They also have Bing, MSN, Azure, and Outlook among various other types of computing solutions for clients. The following are some of the interesting facts that you should consider when learning about the Microsoft platform and its range of products and services.

The company was developed by Bill Gates and Paul Allen, in April 1975, to produce and sell various types of products and software. The company rose to fame to dominate the realms of the computer world and operating systems in the early eighties. Their product the Microsoft Windows is by far one of the most notable computing products all over the world today. In fact, during the eighties, the company’s initial public IPO and price share, led to the development of various job opportunities.
Ever since then, the company has been able to diversify their services for the realms of the operations system products, and they have made various notable business mergers and acquisitions. One of the large ones was the acquisition of the `LinkedIn` company and the acquisition of Skype as well.
Following the unveiling of the Windows Phone, Microsoft has been on a journey to rebrand various aspects of their services and product range all throughout 2011 and 2012. More they have rebranded their logos, products, sites, and products among many other things. The company has also incorporated the concepts and principles of the Metro design platform. The company recently released the Windows 8, operation system which was designed to accommodate both personal and tablet computing devices, just recently. The developer protects The surface one was released in June, and it has become the first computer whose hardware has been mainly developed by Microsoft itself. Just recently, the company paid a significant amount to acquire the Yammer Social network. More so, they also recently launched the outlook.com webmail service, which was meant to compete with their rival company Gmail.

In early of 2014, Steve Ballmer was inclined to step down as the CEO of the Microsoft company, and he was later on succeeded by Satya Nadal, who was responsible for managing the Enterprise division and the Microsoft Cloud platform. More so, the company also John Thompson assumed the role of Bill Gates, and he continues to perform the role of technology advisor in the company.
In April 2014, Microsoft acquired Nokia Devices, and this new division of the company was referred to as Microsoft Mobile OY. In mid-2016, the company released an average of 1700 employees after announcing a comprehensive re-structuring procedure for their operations at the company. During the previous year, the company had lost an average of $7 billion that was related to its mobile phone business and releasing well over 7,700 employees from the company
In late of 2014, the company was known for acquiring the Mojan platform, which is well known for the Minecraft platform. They also acquired another platform known as Hexadite from a particular firm in Israel.

In January 2015, the company announced the release of their first interactive product otherwise referred to as the interactive whiteboard. More so, in mid-2015, the company released the window 10 product, with its associated server sibling and Windows Server 2016 line of products as well.
In 2015, Microsoft was ranked as one of the third largest companies when it comes to mobile phone products, with an average of 33 million units being produced. Although a majority of their products do not run any version of the Windows OS software, those other phones are not classified as phones by various experts such as Garter. In the same vein, the company produced an average of 9 million phones, and most of their share in the phone market in the US averaged 2.7%.
In early 2016, the company announced the merging of the services of the Xbox and the PC division. Phil Spencer was responsible for announcing that windows would be more focused on the gaming for future purposes. The company demonstrated the Intune for Education at a specific conference that occurred in London. This is a specific cloud-based device management and cloud-based application that is used in the education section. More so, they also had plans for launching the intune platform in the coming days with the availability being scheduled for late 2017.

The main headquarters of the company was initially referred to as the Microsoft Redmond Campus, which is located in Washington. The company was initially relocated to the grounds of the company s in the mid-eighties before the company went public the following year. More the headquarters has since then experience various expansions since its development, and it is believed to cover well over nine million square fit of space and its also home to an average of 35, 000 employees. More so, the company also has additional offices in Issaquah and Bellevue.
The company recently announced plans to upgrade its Mountain View, California Campus to accommodate additional operations and activities. The company has occupied this specific space since early in the eighties. More so, they are also planning to purchase part of the campus, with plans to expand their operations over the few coming years.
Main stores
In late of 2015, Microsoft opened their main retail location store on Fifth Avenue in New York. The location comprises a five-story glass building, and it averages at 23,000 square feet. Based on the company executives, Microsoft has been searching for a flagship location since 2009. More so, the company`s retail locations are an important aspect of their strategy and in developing a connection with consumers. The opening of the store was completed with a launch of the Surface Pro 4 and Surface Book as well. More so, the second floor has been reserved for consumers to engage in Xbox games. The third floor has also been referred to as the `dell experience in the Microsoft Company. Additionally, the fifth floor has been designed as a pseudo-conference center, and it will hold meetings and events. In late 2015, the company opened a second store located in Australia. The two-storey building comprises of various Microsoft products including Xbox One and the Surface line of products as well. They also have customer support desk available to help in addressing any customer complications.

The devices and windows division produces their main operating system, which is otherwise referred to as Windows. The company Is also responsible for the development of devices such as Microsoft Surface, which are special touchscreen devices that can be used for as many different types of functionalities. They also produce what is known as the Microsoft Hololens, which is a set of virtual reality smartglasses. Besides that, this place is responsible for the production of the Xbox One, which is a gaming console niche for the company` s products. More so, they also produce various types of products including webcams, headsets, keyboards, and mice among many other products. They are also responsible for the design and management of the MSN web portal. More so, they also produce various types of server products including exchange server, Skype, and SQL server among many others.
Cloud and Enterprise division- The cloud and enterprise section of the company manages their cloud computing resource otherwise referred to as Microsoft Azure. More so, it also produces the Microsoft Visual Studio solution, which is a set of programming compilers and tools that are used in computing. They also develop Microsoft Dynamics, which Is a long line of ERP products and CRM products which are used for various types of applications.
Office Product division- This section of the company Is responsible for the production of the Microsoft line of products. This includes Mircosoft Office, Office Mobile and a long range of apps that are used for Smartphones and tablets. They also produce a range of Microsoft office web apps, and they have various windows live branded products and services through the Microsoft accounts platform. Additionally, they are also responsible for managing Skype, which is an application that is used for video chatting purposes.
AI and Research division- The research division and AI have the role of developing Bing, which is a search engine that is powered by Microsoft. This particular division was developed with the goal of improving their state of the art computing resources and to make it much simpler to solve complications by using technological innovations. This was to be in collaboration the government, industry researchers and academic platforms as well.
Future Decoded- This is a division of the Microsoft platform that is responsible for business networking events that are held on annual basis. The even allows the partners and business affiliates to share the ideas and perspectives on the better computing solutions for the society at large.

Just recently in 2016, Microsoft announced their recent and most notable project which was known as the Microsoft Azure Information protection services. It was developed to allow enterprises and companies to protect their data as they are relayed in between devices and services as well. In late 2016, the Microsoft company combined their services with the Linux Platform as a platinum member in New York.

Command Prompt Tricks to Make Working on Your Computer Easier

Innjoo One vs Infinix Hot Note – The New Phablets, Which...

My adoration for portable photography bloomed during a year...
© 2022 All Right Reserved
Share via
error: Content is protected !!