Galaxy S10+ VS iPhone XS MAX – Which of the Giant Wins?

For a long time now, there has been a fierce battle between Samsung and Apple products. Despite there being numerous other products from other brands in the market, there is still a lot of talk in town about both the Samsung’s Galaxy series and the Apple products that seem to result in people spending thousands of dollars on these brands. 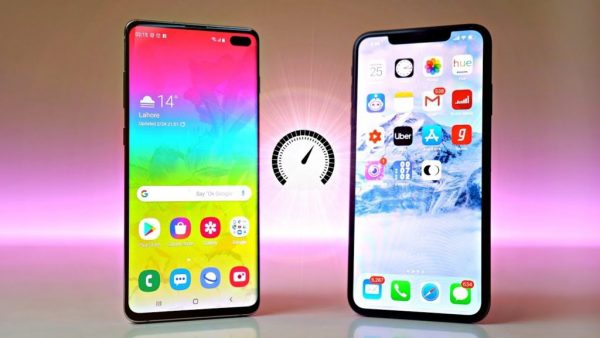 Now more than ever, a big competition between these brands has ensued between the Samsung S10+ and the iPhone XS MAX. The Samsung S10+ has attracted a lot of attention, and if you are a fun of the plus-sized phones, then it must have caught your eye, and the iPhone XS MAX is here to offer it the most magnificent competition.
Both brands promise you the ultimate best experience with features and specs that are just too breathtakingly awesome to ignore, the impressive displays, great speeds, top-notch performance, sleek, stylish designs, powerful cameras and so much more. However, if you are planning on getting this experience, it is important that you learn their features and descriptions to determine which of the two 1,000-dollar phone works best for your needs.

A general comparison between Samsung S10+ vs. iPhone XS MAX

The iPhone XS MAX is equipped with a 6.5-inch AMOLED screen with a 2,688 By 1,242- pixel resolution and HDR10 certified. The screen is generally beautiful, bright, crisp, and showing colors beautifully ensuring that your viewing is fantastic. On the other hand, Samsung S10+ has a 6.4-inch dynamic AMOLED display. With S10+, Samsung has lived up to its reputation that it makes the best screens in the smartphone world.
The screen is a beauty, boasting to be HDR10+ certified. With its 3040 by 1440 pixels resolution, the screen grants you a fantastic color accuracy with blue light filters. You might not note the slight differences between the two phones on your day to day use. The bottom line is that you will get a fantastic display from both phones; however, technologically speaking, Samsung S10+ is better in the display aspect. 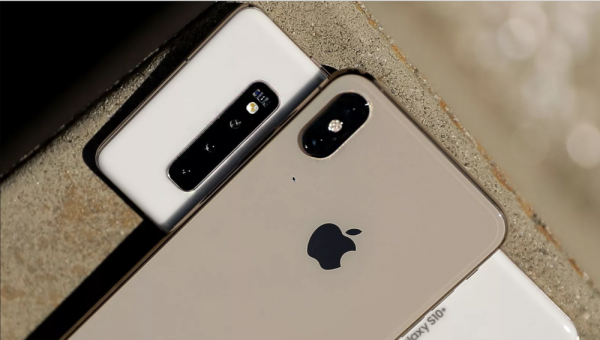 The camera is one of the essential features in a smartphone to some people, Samsung S10+ has taken things to a whole new level; it features a triple lens camera. A 23-megapixel (mp) lens with a variable aperture, a 12 mp telephoto lens and finally a new 16 mp wide angle lens. The front camera is set to use a 10mp and 8mp lenses invariably improving the quality of the selfie shots. Both the front and rear cameras will be able to record 4k video.
The iPhone SX MAX also hosts a powerful camera, with two 12mp rear facing lenses and f/1.8 and f/2.4 apertures. The second lens on this camera is a telephoto lens perfect for portrait mode shots. It also has a 7mp front camera for fantastic selfies. The rear camera can shoot 4k videos. Both phones will offer you a great camera experience no matter your choice but technically speaking the S10+ carries the day. 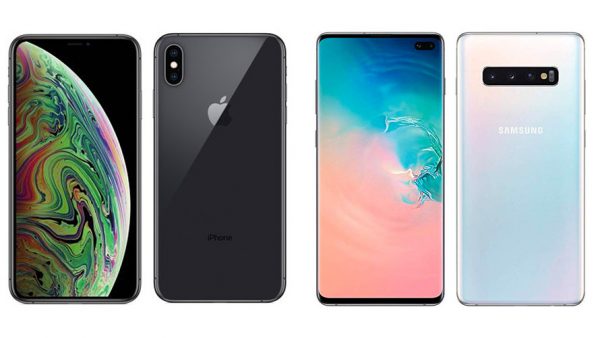 When it comes to the design of the two phones, both companies have done an excellent job. The S10+ features the new Samsung, super clean design. The front of the phone is all display except for the single cut-out for the front camera. At the back, there are three cameras with a clean, sleek look. Note that the fingerprint sensor is no longer at the back of the phone; it was moved to the display, leaving the back with that clean display. The curved glass on the screen may make the phone look unbalanced, but it’s not something to bother you, the long rectangle at the back of the phone gives the phone asymmetrical and a rather luxurious feel.
The iPhone XS MAX edge to edge notch design with its camera at the corner is rather stylish, making it a match to the Samsung beauty. It is well finished at the back exuding a stylish and luxurious feel. Both phones also have IP68 water resistance, meaning that it will survive a slip in the pool. The bottom line is that both phones are of high quality with portraying the luxury and stylishness they offer to the user playing the part of a 1000-dollar phone perfectly.

The XS MAX comes in a 4GB RAM and 64GB storage but with no room for expansion whereas the Samsung S10+ comes in 8GB RAM and 128GB storage and room for expansion. The RAM may not be much to go on in your decision making as the two brands handle memory differently. However, the lack of extra storage as in the iPhone may be a deal breaker for some people.
Battery life, another important feature in a smartphone, these two brands have shown they understand the importance of long battery life in a smartphone coming in the biggest batteries in their range. The S10+ comes with a 4100mAh and 3174mAh for the XS MAX you can go a day before you need to recharge them. Samsung includes quick charge 2.0, which is not as fast as a fast charger in XS MAX. However, you will need to buy the fast charger separately for the XS MAX as it is not included when purchasing the phone. Both phones have Qi wireless charging.

Both the two phones are fitted with the latest tech, but the additional features differ between the two brands. One significant difference is the security feature, and the XS MAX is using face ID unlocking where instead of using a fingerprint scanner to scan the fingerprints, it uses its true depth camera to scan the user’s face. It is secure and rather fast.
For the Samsung counterpart, it still makes use of the fingerprint scanner, but now it is no longer at the back of the phone, it has been moved to the front, inside the display. The Samsung team says the fingerprint scanner makes use of the ultrasonic technology making it more secure than the typical fingerprint scanner.
In terms of the number of features, Samsung picks the trophy, it has included features such as AR Emojis, virtual reality support, and Dex desktop mode, however not everybody will like all the added features.

The iPhone uses the A12 Bionic chip, and this is the same as the one used in iPhone XS and iPhone XR is known in this market as the fastest mobile processor. Samsung Galaxy S 10+ uses snapdragon 855, which is the latest and the best mobile processor from QUALCOMM but it is not a match to Bionic 12. This is to say that even if the iPhone has half the RAM the S10+ has, its performance is still higher all this is thanks to Apple’s control over its hardware and software.
Though not very original of them, Samsung’s wireless fast charging is rather innovative, it’s no brainer when it comes to the phone with better battery management. You can wirelessly charge any Qi-certified device using your Samsung Galaxy S10+.
The screen is another impressive feature of these two phones. However, the iPhone’s cannot possibly beat the S10+. This new dynamic AMOLED tech and HDR 10+ will make playing games and watching videos on your galaxy S10+ so much fun. This is a screen with a more impressive display than other already impressive Samsung phones’ screens. It’s just so cool, plus the punch hole camera at the top of it is not any more intrusive than the XS MAX’s notch, and it gives it a characteristic look.

This is a tough race between the two premium phones, Samsung S10+, and iPhone XS MAX. However, S10+ takes the prize. After checking out the features and specs of each of the two phones, S10+ is not only the better phone, but it is also the phone with better value. Features such as the battery life, display, and camera are all the better on the S10+. However, it all goes down to your taste some people generally prefer iOS while others prefer Android systems. If you prefer android systems, then the Samsung S10+ is your choice while for the iOS fans, the iPhone SX Max is their choice. Some apps can only be found on either of the phones such as Apple pay and iCloud will only be available on Apple brands thus if you regularly use such apps, then the XS Max is your choice.
Some people may also favour some feature others think is not of much consequence; for instance, some fancy the facial ID feature in the iPhone and may be all they need to choose the iPhone. No matter the choice you make, the truth is that you are sure to enjoy as they are both fantastic phones. The Samsung S10+ is a buddle of great features put together in an excellent sleek and beautiful design and comes at a bearable cost in comparison to the iPhone XS Max.

Samsung Galaxy S9 Plus or Edge: Which Is the Better Galaxy...

Samsung Galaxy A74 Pro – Specs, Features & Where to Buy

Eleven Tweaks That Can Optimize Windows 10 for Exciting Gaming Sessions