Russia, the largest country in the world, offers a wide range of tourist experiences ranging from hiking to the pistes of glacier-capped mountains to walking along the coast of the oldest lake on earth. The country’s great cities also offer rich historical sites and cultural events. Whether you visit the Moscow Kremlin or walk through the steppes of Mongolia you will not quickly forget to visit Russia. These top Russian tourist attractions can inspire a superb Russian journey.

The traditional Trans Siberians extend from Moscow to Vladivostok, a town at the borders between Russia and China and North Korea, one of the world’s longest rail networks. Beginning in 1891 with Tsar Alexander III and finalized in 1916 in the name of the Tsar’s Route by his son, Czar Nicholas II. Most travelers use the train from one point to another as a place to stay overnight. The train has sleeping accommodations in the first, second, and third class, some with private bathrooms and showers. 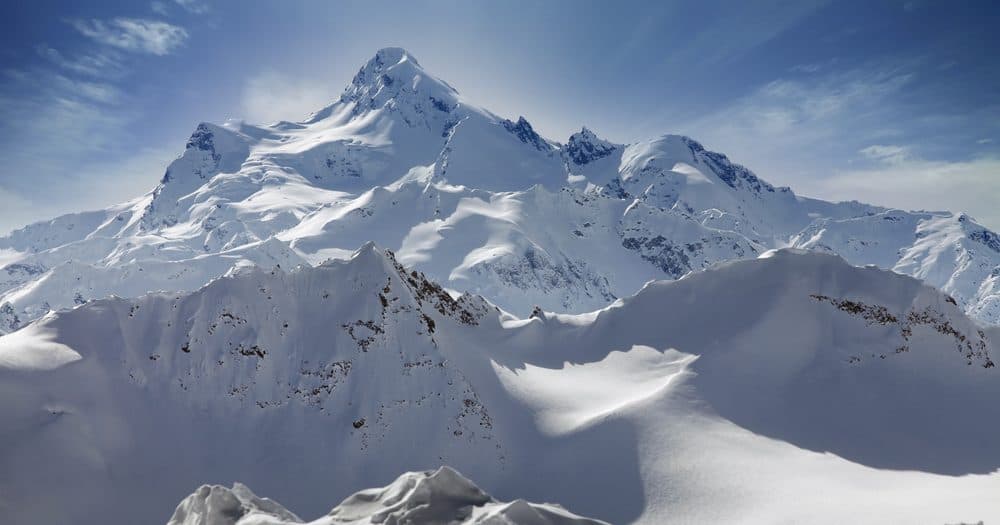 Mount Elbrus is located in Southern Russia’s the Caucasus Mountains. At 5,642 meters (18,510 ft), Elbrus is one of the Seven Summits that draw both experienced and novice mountaineers, the highest peaks on each of the seven continents. The mountain was formed from the volcano, however, it is regarded as sleeping without any eruptions documented. A cableway system can convey guests up to 3,800 meters (12,500 feet) to the top. It is one of the must-visit Russia tourist attractions. 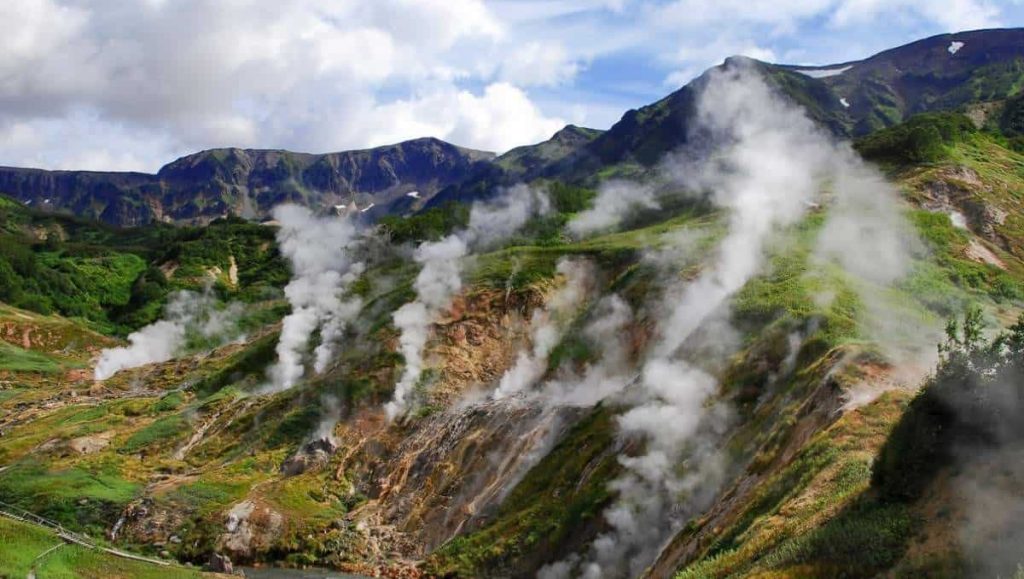 The Geysers Valley is the second most extensive geyser field in the world and is located on the Kamchatka Peninsula in the Russian Far East. In 1941 local scientist Tatyana Ustinova found the Valley of Geysers. Since that time it has been a famous attraction for tourists and scientists in Kamchatka.

Kizhi islands are most renowned for an extraordinary open-air museum situated in Karelia, a region in the northwest of Russia bordering Finland and the White Sea. Since the 13th century, the Karelians have been living in the region, split between the East and West cultures. The museum collection consists of the church, which is 120-foot high and is renowned for its 22 domes, the Transfiguration of Our Saviour. Dozens of wooden buildings, windmills, churches, and barns are also Russia tourist attractions. Craftsman shows and ensembles symbolize the peasantry culture. 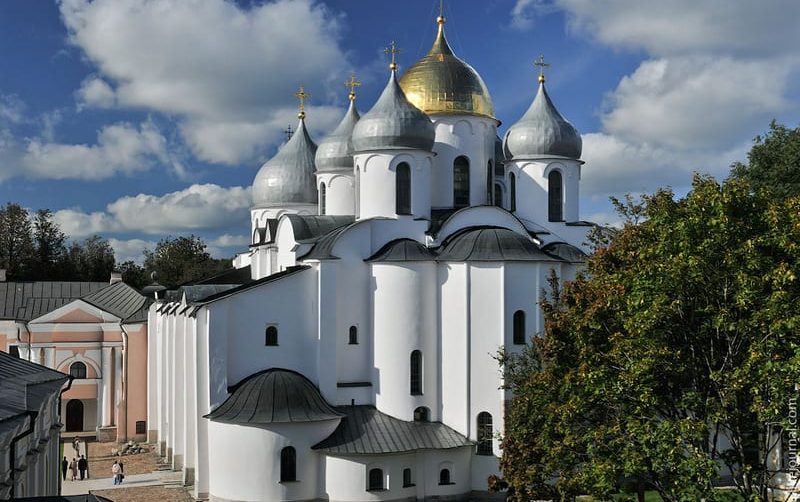 The Saint Sophia Cathedral is located in the city’s Kremlin area in Novgorod, Russia’s oldest city. The cathedral is the oldest church edifice in Russia, standing at 125 feet high, and ornamented with five beautiful domes. The cathedral of St. Sophia contains an assortment of historic religious objects such as The God of the sign, which is an icon of legend that saved Novgorod from the 1169 attacks. The cathedral also dates back to the 12th century, with its three notable decorated doors. 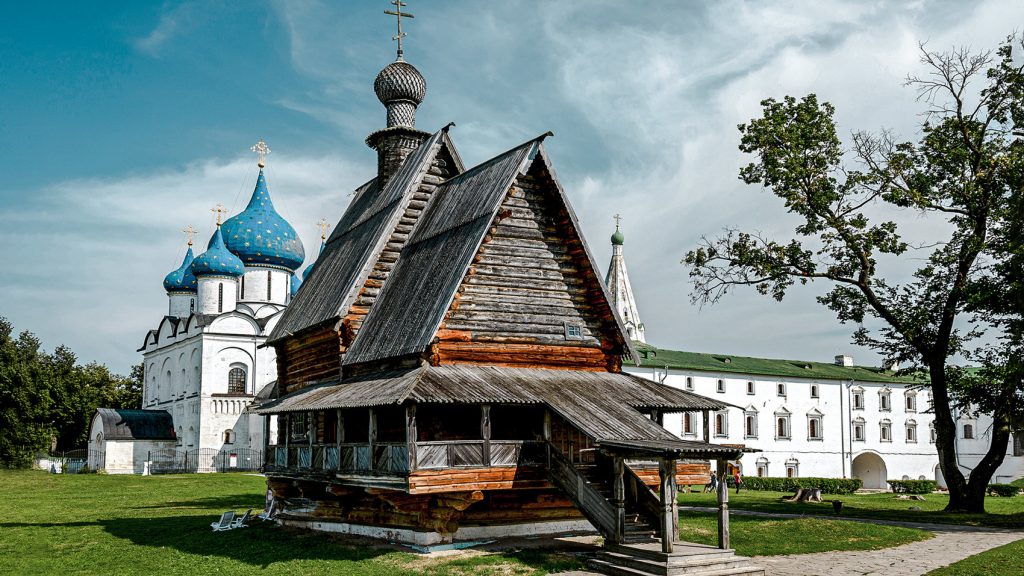 Suzdal is one of the outstanding displays of ancient Russian architecture with its history dating back to the 10th century. It is full of several amazing Kremlin, cathedrals, and monasteries that make visitors feel timeless. This historic town near Vladimir has worked several times as a capital, one of the cities that make up the golden ring. The whole of the town is like an unknown museum. 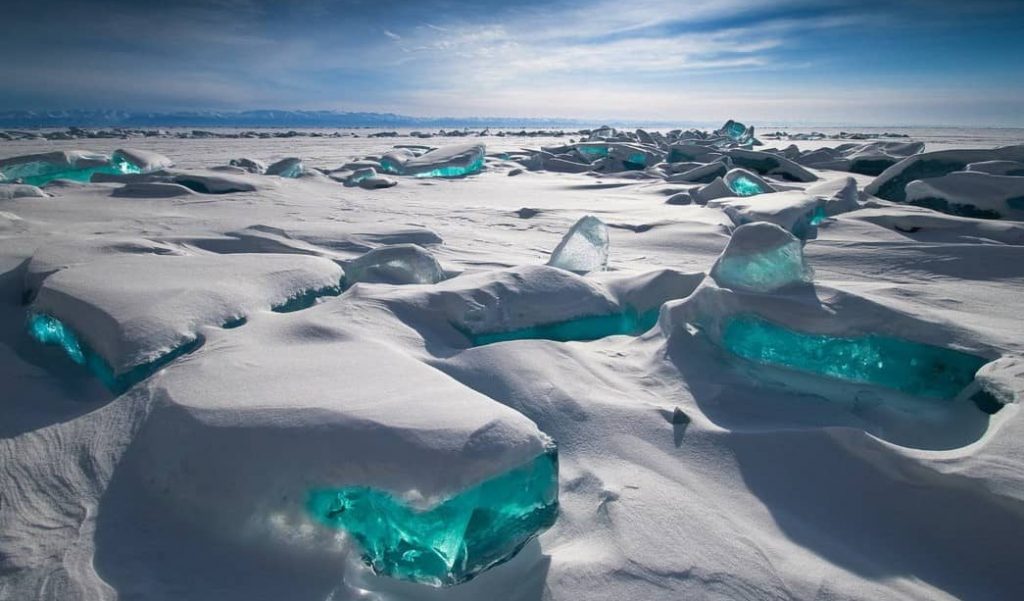 Lake Baikal is the largest freshwater lake in the world in the Russian region of Siberia. This is considered to be the world’s oldest lake and is the seventh-largest lake in the world, measuring around 25 million years ago. Lake Baikal is home to around 1700 plant species, innumerable animals, and birds with a surface area of 31,722 square kilometers. This is one of Russia’s top tourist attractions, with many wonderful hotels and resorts on the shores and a charming scenic environment.

The highly popular Curonian Spit National Park was named a national park by 1991, and was formerly called Kurši? Nerijos Nacionalinis Parkas. The national park is situated across the Baltic Sea and runs from Lithuania into the Russian enclave of Kaliningrad.

The Curonian Spit National Park is home to thick pine forests full of wild boar, elk, and deer. This National Park lends itself to the beautiful sand dunes and calm wind loaded with aromatic pine fragrances, located far away from the hustle and bustle of the city.

Limpopo Zoo is not just one of the country’s best zoos, but also one of Russia’s leading family-friendly tourism sites for a fun day out. This amazing zoo houses a host of reptiles, fish, birds, and mammals. It is one of the beautiful Russia attractions.

Indian wildlife such as leopards and Amur tigers and exotic species such as apes, stingrays, and kangaroos can be found. The zoo also offers pleasant tours and play places where kids may relax. Some eateries that sell food and drinks globally are also available here.

Olkhon Island is the largest island on Lake Baikal and the third largest lake island in the world, stretching across a gigantic area of 730 square km with a length of 71.5 km and a width of 20.8 km. It is one of the beautiful Russia tourist attractions.

The island is the southwestern border of Academician Ridge. Olkhon Island offers nature lovers a picturesque area to relax and enjoy the beautiful views of the lake. It is bordered by steep mountains on the island’s eastern shore, with Mount Zhima the highest peak on the lake at an altitude of around 2.684 feet. 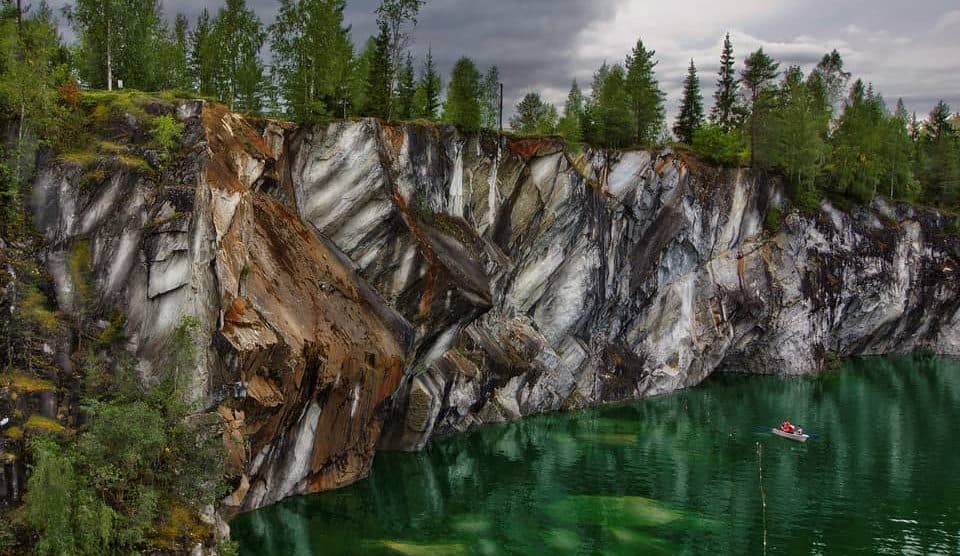 Ruskeala is a tiny rural Russian village recognized for its pleasant environment, stunning vistas, quiet environment, and renowned Ruskeala Mountain Park. It is famous for the marble source used to construct a lot of iconic monuments in this country, such as St. Isaac’s Day, the Hermitage Square, and its flooring, and is one of the top Russia tourist attractions in Russia. Ruskeala Mountain Park is famed for being a source of marble.

This park also offers guests an opportunity to enjoy the view of the beautiful paths and the old marble quarry, which today is bordered by water. 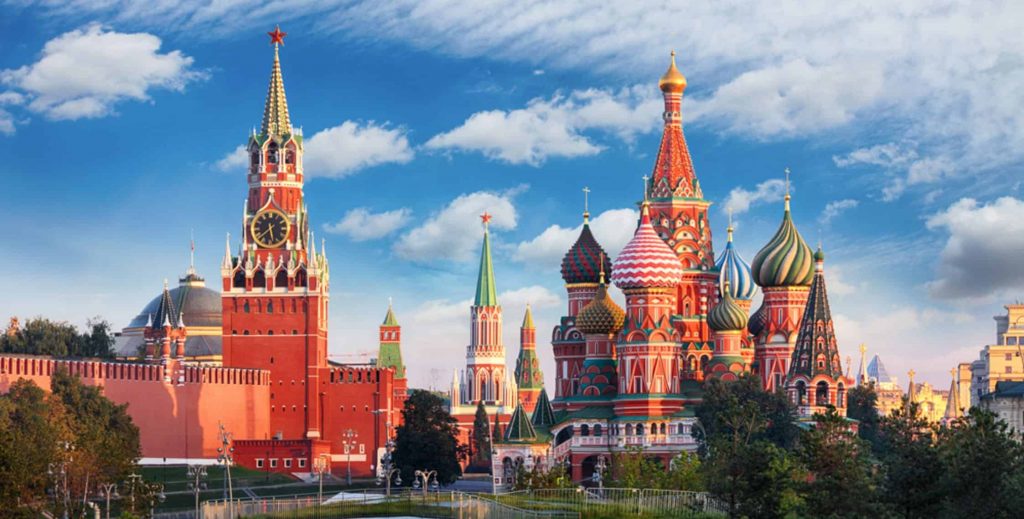 Red Square is one of Russia’s most popular and famous squares and home to a plethora of major monuments in the city of Moscow, one of the greatest tourist sites in Russia. This vibrant square has the Kremlin, the State Museum of History, the Cathedral of St. Basil, GUM, and the Mausoleum of Lenin.

Red Square is the main square in the city, and from it radiate all the major streets. The square is breathtakingly lit up in the evening with colored light and various events. You may enjoy ice-skating during Christmas, attend Christmas seminars or savor different candies on Red Square.

The Krestovsky Stadium is one of Russia’s most culturally important locations also known as St Petersburg’s Stadium. The stadium of Krestovsky is built on the same ground as Kirov, making it one of the largest stadiums in the world.

After the Fifa Cup and the World Cup in 2018, this stadium became well-known. The Stadium of Krestovsky has a total capacity of 67 000 viewers at a given moment. 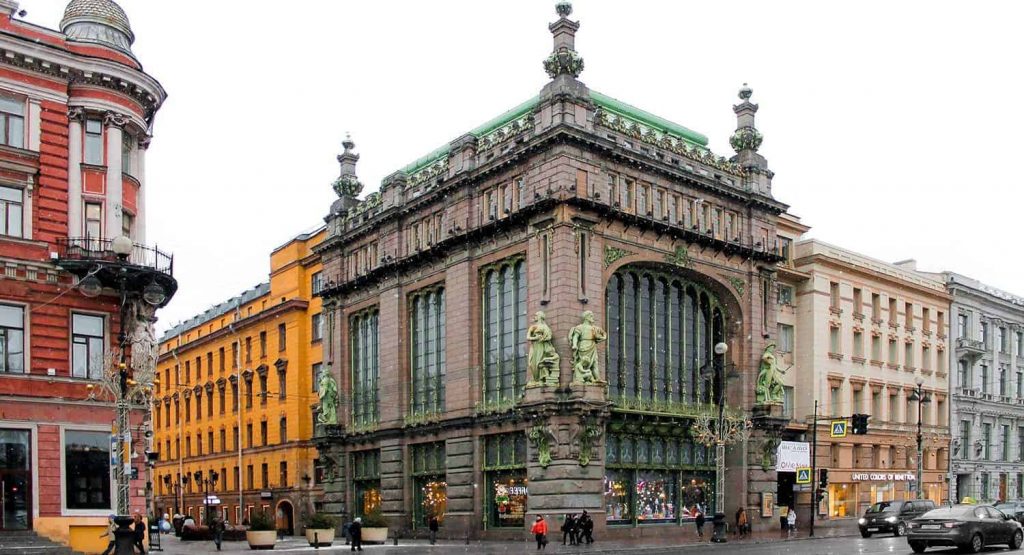 Lying on the Newsky prospectus, Eliseyev Emporium flashes an astonishing decoration and a spacious seating area as one of Russia’s leading locations to visit for foodies. This lovely emporium offers wonderful genuine Russian dishes that will satisfy your taste buds superbly.

Eliseyev Emporium allows you to experience countless types of food, with colorful Art Deco in the background, and soothing live piano music. You may also try quality genuine Russian wines here, which will make your palate crave more.

Peter the Great, at that period, considered the largest island in St. Petersburg, Vassilyevsky Island, to be the center for the capital. The island was also the site of a multiplicity of notable building projects in the past. It is one of the beautiful Russia tourist attractions.

Enjoy your trip to Russia and don’t forget to share your experience in the comment section below.

How to Ensure Your Content Does Not Violate Copyright

Top Destinations for Holiday in December

Barbados is an island in the eastern Caribbean, and...
Attractions

Florida is made up of beautiful and cozy beaches,...
© 2022 All Right Reserved
error: Content is protected !!