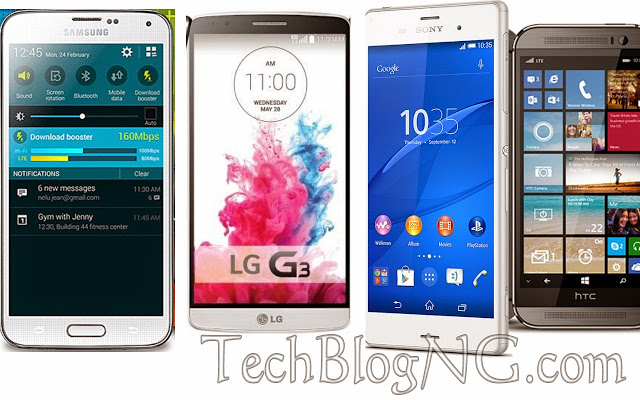 As we all know it’s era of smartphones and we keep seeing new smartphones mostly every month with different specs and I think comparing different smart phones would help customers make an informed choice during acquisition. It is however difficult to come up with the best among them, as different people have different needs and preferences.
Lets look at the 3 smartphones I want to discuss about today:
HTC One M8
Just like Apple phones, HTC phones have great design. The One M8 is 9.35 mm thick and weighs 160 g. It is available in metallic grey, silver, rose and gold. The phone has boom sound speakers at the bottom and top of the screen which produce high-quality sound. The Samsung Galaxy S5’s design is more compact when compared to the One M8 one. The HTC has a micro SD slot, which can support cards of up to 128GB, just like the Galaxy S5 and Sony Xperia Z3.
LG G3
The most prominent feature is the QHD screen. While this might seem mind-blowing, comparing this screen with the Galaxy S5′ which packs 2 million pixels (compared to 3.6 million in the G3) will show that the G3 produces sharp images. However, when compared to the Galaxy, it still has some way to go in its resolution.
It is important to note that the G3 offers 538 PPI sharpness while Samsung offers 440 PPI sharpness. The sharpness offered by G3 is comparable to high-end glossy art books. This is what LG used as a benchmark and an ultimate goal.
The G3 has seen a significant improvement in its interface compared to its predecessor. It has colors that are very similar to HTC’s M8, and a flat design reflective of apple. Unlike the Galaxy S5 which features a magazine option, the G3 features a speedometer and tips videos.
The G3 also has a ‘metallic’ chassis. It looks premium
and is lightweight, since it is made from polycarbonate.
It is available in 3 colors: silver, gold, and black. Like the Galaxy S5, the G3 also helps you maintain a healthy lifestyle. However, while the Galaxy offers a heart rate monitor, the G3 offers a fairly in-depth stride sensor, among other elements.
The G3 has a 13 MP rear camera and a 2.1 MP front camera. The rear one uses laser auto focus and the front one has a wider angle, accommodating more people in the photo. The front camera also has a flash, lighting up faces for better pictures.
The Sony Xperia Z3
The Xperia Z3 is available in black, silver-green, white, and copper-gold. It also has an IP68 rating, which ensures that it can stay in 1m water for more than half an hour. It measurements are 146 x 72 x 7.3 mm. The chassis is slightly shrunken, making the phone a bit thinner. The edges are rounded, which makes holding the phone very easy and comfortable. The speakers are front-facing, helping produce great sound. The Z3 has a smaller design when compared to the HTC One M8
Different smartphones have different strengths. Some like the LG G3 have superior image sharpness, and a front camera with a flash, while the Samsung Galaxy S5 has a high screen resolution. The smartphone that bests suits your needs and preferences is what you ultimately go for, thus among the 4 smartphones discussed, it might be difficult to conclude what the most superior phone is.
-Advertisement-
0 Shares
Share on Facebook Share on Twitter Share on Pinterest Share on WhatsApp Share on WhatsApp Share on Email
Hiidee February 19, 2015