According to the reports, Whatsapp has 1.2 billion monthly users, with users sending 60 billion messages per day, including 3.3 billion photos, 760 million videos, and 80 million GIFs. This makes it the best messenging platform so far. If you have been using Snapchat before you will know there is a feature where you can type about everything you are doing on Snapchat. So Whatsapp will also be welcoming this feature in their next update. 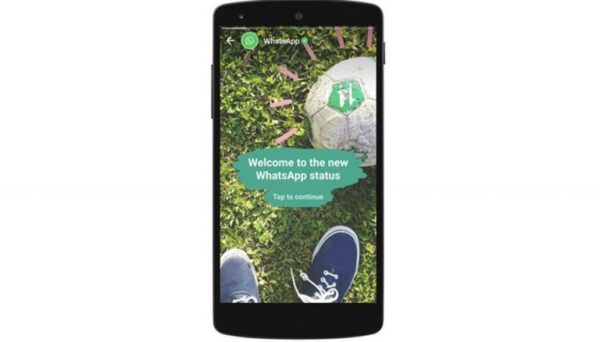 “We are excited to announce that, coinciding with WhatsApp’s 8th birthday on February 24, we are reinventing the status feature. Starting today, we are rolling out an update to status, which allows you to share photos and videos with your friends and contacts on WhatsApp in an easy and secure way. Yes, even your status updates are end-to-end encrypted.”

With this feature been added, Whatsapp may put an end to the growth of snapchat. Because the feature is coming with more fancy and advance skins than the snapchat own. The new feature will let you share photos and videos in a montage format for up to 24 hours before they disappear. One of the special features in the update is that it’s end-to-end encrypted like WhatsApp messaging.
With the new Whatsapp feature you can share GIFs on your Status all the Status updates are end-to-end encrypted, which implied that once they disappear they really disappear. Videos status can be about 45 seconds long, not just 15 seconds like other platforms use to offer.
The feture was tested by beta users around November 2016, but now the status feature will be rolling out on iOS, Android, and Windows Phone using Whatsapp.
Check more from the Video below:

Off-Page SEO Optimization: Full Guide & All You Need to Know...

Super Best Fun Loving Things To Do in Dubai

8 Tips and Tricks to Get the Most Out of Your...

With WhatsApp, one of the world's most widely used...
Tech

Are you advertising with the Facebook ads? If Yes...
How To's