May 6, 2021
-Advertisement-
Every new smartphones and tablet is bigger than their predecessors as the market keep loaded with new and different smartphones, Apple is still delivering us smaller products and this doesn’t mean you have to compromise with any aspect. 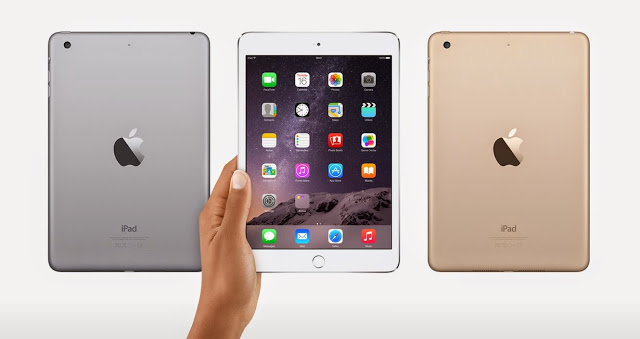 Those tablets and phones will provide you with the same experience as some bigger devices and
not to mention Apple’s elegant design of their products. Let’s see how iPad mini 3 fits in with
some of these important specifications and features.
Display and Design
Apple hasn’t made any changes to the Retina display on the iPad mini 3, so it has the same resolution as its predecessor-2048×1536 at 326ppi. You’ll love this display when watching movies or TV shows, as well as having fun with the games and applications you’ve downloaded from the App Store.
As Apple is well known for the classy, elegant design of its products, the iPad mini 3 is no exception. It is a greatly designed tablet that feels and looks amazing in your hand. It is made of aluminum and very easy to hold in hands thanks to the light texture on the back of the device. A pleasant surprise in the mini 3’s design is that it’s now available in the new silver, gold, and slate grey colors. This easily manageable 8-inch tablet weights only 331g and has all metal buttons that are easily accessible.
Above the volume buttons is the mute/rotation lock and at the bottom of the device is a
charging connector and Apple’s data transfer cable socket.
Touch ID
The addition of the Touch ID on the iPad mini 3 is actually the only big difference between the
mini 3 and its forerunner. It is really simple to set up and use. With this biometric security
system you can easily unlock your tablet, since your fingerprint unlocks it thanks to the sensor
that it embedded in the Home button.
Cameras & Battery
The iPad mini 3 has a pretty solid camera. This tablet has the same cameras like its
predecessor, so we’re talking about 5MP iSight camera with f/2.4 aperture on the back, which
is capable of capturing 1080p videos at 30fps; and 1.2MP FaceTime camera on the front of the
iPad mini 3 that can capture 720p videos.
The 6470mAh battery unit on the iPad mini 3 is excellent. Apple claims that you can get up to
10 hours of web browsing on Wi-Fi, watching videos or listening to the music. If you use your
mini 3 for a couple of hours on the work and about an hour or two at home, you’ll only have
to charge your tablet once in every three days.
Overall, the iPad mini 3 has a pretty impressive battery life. There is no doubt that the mini 3 is a great tablet, it has both the looks and the performance. However, a lot of users say that they’re not so happy with the Apple’s job on the mini 3, since it is too similar to its predecessor, with the only big differences in the Touch ID sensor and the addition of the gold, silver and slate grey casing.

-Advertisement-
Previous articleWant to Use WhatsApp on PC? It’s Now Available for Firefox & Opera Browsers
Next articleWhy Duplicating Content Will Make You A Laughingstock

Spectacular Things to See and Do in Azores, Portugal

4 Cool WhatsApp Tricks You Should Try Out