May 6, 2021
-Advertisement-
The Galaxy Core Prime was introduced months after the existence of Galaxy Core II.
Although it shares many specs with other core versions but comes with better improvements that makes it stands out from the crowd. A better Camera feature and a more powerful chipset are among the improvements. 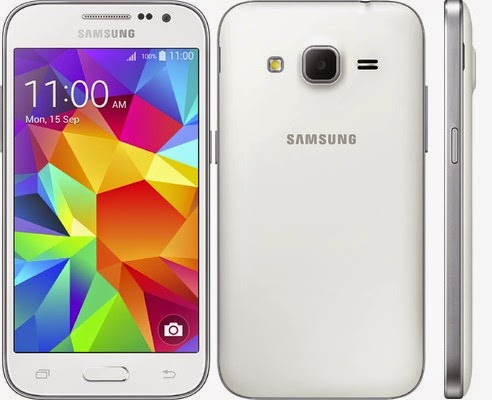 The 4.5 inch and 130g Galaxy Core Prime is sized 130.8 X 67.9 X 8.8mm which makes it to be easily dig into the pocket. The back panels looks alike with the Galaxy S3 design following the presence of a camera, LED flash and a speaker but the back material is made up of same material used in Galaxy Grand Prime which is a shiny yet not glossy material that hides fingerprints quite well. It was equipped with better network mode including 4G LTE service. The Smartphone has been available since November 2014 in Black, White and Gray colours letting you choose your preferred colour among the three. The power button and the volume buttons are well positioned and would be easy to make use of conveniently.
Let’s go into the full specs of the Galaxy Core Prime as analyzed below:
PLATFORM
Android
OS:         v4.4 Kitkat
Chipset:                Qualcomm MSM8916 Snapdragon 410
CPU:                    Quad-core 1.2 GHz Cortex-A53
GPU:                    Adreno 306
MEMORY & CAMERA DETAILS
The Galaxy core Prime was built with an Internal Memory of 8GB and still have Micro SD
card slot (external memory slot) which can use upto 64GB External Memory Card. The Galaxy Prime is a 1GB RAM smartphone and would works great when in use.
Galaxy Core Prime is equipped with 5MegaPixels
Main Back Camera of 2592 X 1944 pixels of image with Autofocus and LED flash
that can record 720p videos. The features of the camera includes Geo-tagging,
touch focus and face detection. It also have a Secondary Camera (front camera)
of 2 MegaPixels. The image quality
is very good with pretty accurate color rendering and excellent overall
processing. The video quality is excellent with smooth, sharp and no noise
features.
OTHER FEATURES
WLAN:                WiFi 802.11 b/g/n, Wifi Direct  and Hotspot
Bluetooth:            v4.0
GPS:                     A-GPS, GLONASS, Beidou
USB:                    MicroUSB v2.0
Java:                     Java Midlet Emulator
Battery:                Li-Ion 2000mAh which boost efficient standby
The Galaxy Core Prime is a smartphone with better performance but its poor contrast
would fail you every time you make use of the phone.
-Advertisement-
Previous article
HTC One M8 VS Nexus 6 – Specs and Price Review
Next article
Top List of Antivirus to Protect Your Windows & Mac PC

How to Setup BitLocker Drive Encryption Security on Windows