Samsung GalaxyTab S VS iPad Air 2 – Which one is Better?

Apple released the iPad Air 2 and the iPad Mini 3 at the same time, but we’ll refer to this big tablet and compare it with one of the two Tab S slates that were also released this fall. So, it’s the war between two eternal enemies, Apple and Samsung and they’ll try to convince you that their tablets are better but below is a comparison between their product. 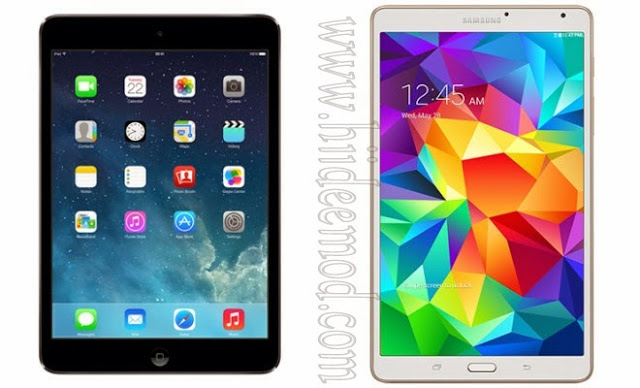 Either Apple doesn’t have new ideas on how to improve the design of its products, or they are convinced that it’s not worth the effort and prefer to focus on the internal parts. Anyway, the aluminum body of the iPad Air 2 is simple, beautiful and durable, but you might think it’s fragile because of its thickness of only 6.1mm. The slate weights 437grams – the WiFi variant or 444grams – the 3G/LTE variant and has a height of 240grams. On the front panel, hidden inside the rounded home button there’s a fingerprint scanner, but it serves only to lock and unlock the homescreen using your fingerprint. The screen is LED-backlit IPS LCD, sized at 9.7inches and supports 1536×2048 pixels at 264ppi.
The bigger variant of the Tab S has a 10.5inches Super AMOLED screen with a much higher resolution of 2560×1600 pixels that gives a pixel density of 288ppi.
Unless you’re fault-finding kind of person, you’ll be disappointed of the screen quality of the Tab S. But
we’ll understand if you’ll criticize this tablet for looking like a larger variant of Galaxy S5 smartphone, which has an ugly dotted pattern on the back. The device is 6.6mm
thick and weights 467grams.

Both tablets are fitted with 8MP back cameras, after Apple upgraded the 5MP camera from the previous iPad, but didn’t add a LED flash to allow the slate to take pictures at night, without a light source. The Air 2 has also a weaker front camera of 1.2MP, compared to 2.1MP.

Until now, Apple has reached the pink of perfection with the improved A8X chipset that supports now a triple-core 1.5GHz processor with 2GB of RAM, being 40 percent faster that the first iPad. The Tab S is using two versions of processors, one that is a Qualcomm Snapdragon 800 quad-core 2.3GHz Krait 400 coupled with Adreno 330 graphics and the second one has an Exynos 5 Octa 5420 chipset with two quad-core processors clocked at 1.9GHz and 1.3GHz, being paired with Mali-T628MP6 graphics, and both variants are housing 3GB of RAM, for a better performance. But, Samsung will start using 64bit processors only in 2015 and we’ll see one on the upcoming Galaxy S6 flagship.
It is known that none of the Apple products come with microSD card slots, so the storage options for the iPad Air 2 are 16, 64 and 128GB. The Tab S allows you to increase the 16 and 32GB variants of internal memories up to 128GB.

The pricing for the iPad Air 2 starts from $499 and probably the cheapest Tab S would be around $475.

Optimizing Your Business Website for Mobile Users Made Easier

The Best of Lenovo Laptops

The lightning-fast refresh rate of 90 Hz gives you...
How To's

Are you trying to recover Gmail password without using...
Gadgets Review