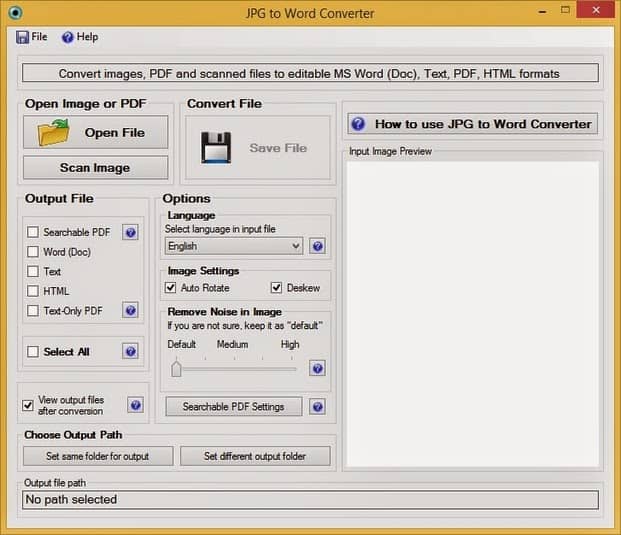 The idea of converting JPEG files into editable formats is a need of the hour for professionals working in publishing and media industry. This was really not possible with the older options of printing and publishing industry. Thanks to the high speed changing technology which has changed the phase of the world. The idea of optical character recognition or OCR has made things possible for converting any JPG to word files, which gives the user the option to edit and make changes as per your whims and fancies. These are found in the form of a number of software converters, which we will be discussing as under:

SimpleOCR
This is among the best JPG to Word Converter software which is known for even recognizing handwritten stuff without any hassle or issue. This is one of the important features of this software program. This software program is competent enough to read the document from the scanner or even adding up a number of pages in formats including JPG, bmp, tiff formats. This software program is seen offering you some kind of control over the conversion via text selection; image selection and text content ignore features.  The conversion to text content simply takes the procedure into a validation stage wherein the users can easily correct or edit the discrepancies into converted text via the feature called spell check, which is basically inbuilt in this software program. This software gives you the option of converting the image (JPG/txt) into document formats without any hassle. Now talking about the downsides of this software, this may be a great software tool for managing normal text content but may fail in managing the multi column layouts. This software has its latest version of size 9 MB, which is very much compatible to Windows.
You can also download directly from softonic.com

TopOCR
This software tool can be called as a breakaway in the list of ocr software programs, simply designed more for digi cams of capacity of 3MP and mobile phones, which even include the scanners. Unlike the simpleOCR, you can find two window interfaces – the source image window and the text window. The image that are sourced via a camera or the scanner over the left window can gets the converted into the text content format seen over the text editor over the right. The functions found in text editor include the WordPad and that can be used via the Text to Speech engine from Microsoft. This software is known to support a number of formats including bmp, jpef, tiff and gif. You can easily enhance t color, contrast and brightness along with the readability of the content.

FreeOCR
As the name suggest, it is a free software converter, which employs Tesseract OCR engine, which was developed long back in the eighties. It is considered to be the most accurate OCR engines designed in the open source. Now talking about its features, it is supports a number of image files and multi page TIFF files. It can handle the PDF formats, which is even compatible with Twain devices including the scanners. The software comes up with familiar kind of double window interface, which makes it simple to understand and operate.

Alia is an internet marketer. He loves to writing about technology, digital media and software’s. These days he is busy to writing an article on Scanned JPEG to Word Converter.

How to 99% Secure Your Adsense Account from Invalid Activity

How to Activate and Check Microsoft Office 2013 Activation Status

Why Your Computer Needs More Than an Antivirus

How Long Do You Have Before Your Job is Taken Over...

Purchasing a used iPhone online (eBay and others) or...
Computer